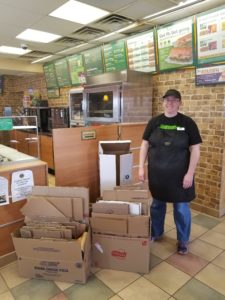 Subway, a privately held fast food restaurant franchise that has been around since 1965 opened a branch, thanks to Jim and Virginia Trotter of Ord, in 2010 in Burwell, Nebraska. Since opening, the Burwell store has been extremely successful in serving locals and passers through with amazing food and a friendly atmosphere.

In 2013, Carrie Rasmussen, was hired as Store Manager and implemented some superb conservation and environmentally friendly practices that have served the community and business well. Subway’s Burwell store is proud to promote their involvement with recycling cardboard and #1 plastics at least 2-3 times a week. These practices were made possible by the introduction of the cardboard recycle semi trailer at the Loup River Scenic ByWay Interpretive Center during Nebraska’s Big Rodeo 2014 and the plastic, paper & aluminum trailers found at various locations in Burwell.

The easy accessibility of the semi trailer and recycle trailers have led to an increase of recycling. Carrie said that the implementation of cardboard recycling was triggered by her experience with using it as animal bedding. “The cardboard takes up a lot of room in the dumpster and having the semi trailer to put it in for recycling seemed like a great option. Plus, the animal bedding that the recycled cardboard is made into makes amazingly soft, more absorbent bedding for horses or any animal’s feet. So why not!” said Rasmussen.

Carrie also would like to encourage other businesses and individuals to participate in changing their recycle habits. “Recycling is not hard it just requires some extra time and some extra steps and we all are after those extra steps for health purposes!” stated Rasmussen. What an awesome way of looking at recycling! Not only are you doing something great for your environment but you are doing something wonderful for your health!!!

There are no upcoming events.

I want to be a bench - Keep America Beautiful

Reading Rainbow: How Trash Is Recycled with LeVar Burton

Recycling - Journey :60 I want to be a bench